I’ve noticed that I’ve had a few visitors from Pinterest and Instagram lately, so it doesn’t feel quite as much like a ghost town here anymore! If you’ve come here from social media, thank you so much for following and/or clicking on my links. Today’s recipe is this chocolate coconut crumb cake, and it’s one of my favorite things I’ve made all winter. I love coconut, but I’ve never been a big fan of the sunscreen scent taste of coconut extract, so I chose to rely on virgin coconut oil in this recipe – I love how it gives an immanent coconutty flavor to baked goods that is not overwhelming or artificial tasting.

Solid Virgin Coconut Oil – I used coconut oil that is solid at room temperature, not liquid fractionated coconut oil. I did not test the liquid kind, so I’m not sure how well it would work in this recipe; also, the liquid oil is usually more refined, and has much less coconut flavor. I used virgin coconut oil also because it is less refined and retains more flavor.

Coconut Milk – I used canned, non-emulsified coconut milk. When it hasn’t been emulsified, the coconut milk will be separated in the can, so you’ll need to mix it up before adding it to the batter. I find it easiest to open from the bottom of the can, so you don’t have that thick layer of coconut cream to break through before stirring it up.

Shredded Coconut – I used sweetened, shredded coconut, but other types of dried coconut would work here too.

This cake recipe is very easy to veganize. Replace the egg with 1 tbsp flax meal (ground flax seeds) and 3 tbsp water, and make sure to use nondairy chocolate. The cake will need 5-10 minutes longer to bake out the water. 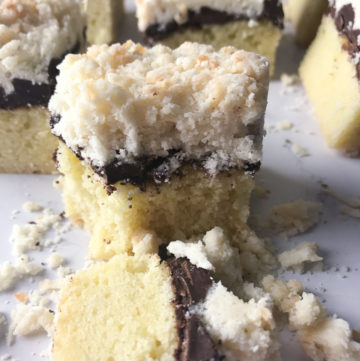 For the Cake Layer

For the Crumb Topping