When I visited Hawaii 2 years ago, I only stayed for a week and a half, and it was just not enough time to try more than a small percentage of the amazing foods Hawaii has to offer. I did have the chance to try the purple sweet potato haupia bars found at farmers’ markets, but I left Hawaii without ever knowing about chocolate haupia pie, which is sold in Hawaiian bakeries and supermarkets. Haupia is a thick coconut pudding that’s unbelievably easy to make – coconut milk thickened with cornstarch or arrowroot powder. Chocolate and coconut is always an excellent combination, and even better, these bars have the flavor of coconut-chocolate covered macadamia nuts.

Macadamia nuts – Unless you actually live in Hawaii, it can be hard to find macadamia nuts that are not roasted and salted, and for that reason, I omitted salt from the shortbread recipe. If you are using salt-free nuts, you will want to add ¼ tsp salt to the shortbread layer.  I was able to find unroasted nuts, and I didn’t pre-roast them because the shortbread cooks in such a thin layer for such a long amount of time that the effect is basically the same, but if you can only find pre-roasted, it would not compromise the flavor.

Coconut Milk – I used canned coconut milk, not the kind found in the dairy section of the store, and not coconut cream.

Substituting Arrowroot for Cornstarch – I did not try it, but I have read that haupia used to be made with arrowroot in the past, and that you can substitute 2 tsp arrowroot powder for 3 tsp cornstarch – in this recipe, that would mean using ¼ cup arrowroot to replace ⅓ cup cornstarch.

Chocolate – You can use whatever cacao percentage you want, depending on your taste. I used “dark” chocolate chips that were slightly sweetened, and even then these bars were not overly sweet.

Make sure to grease and flour the baking dish well. After allowing the shortbread layer to cool, before adding the other layers, see if you can pop the shortbread out in one piece, then put it back in. This will make the bars much easier to get out once they have been refrigerated.

To prevent lumps, make a slurry of the cornstarch and water before adding it to the coconut milk. The starch will settle very quickly, so make certain to stir it again just before adding.

Add the hapuia to the chocolate immediately after taking it off the heat. Let the hot haupia sit on top of the chocolate for 30 seconds before stirring, so that it has more time to melt. The smaller your chocolate pieces, the quicker they will melt, so if you use a chocolate bar, you’ll want to chop it finely.

This recipe is easily veganized. For the butter in the shortbread, substitute ½ cup solid coconut oil and 1-2 tsp milk, and substitute equal amounts non-dairy milk and dairy-free chocolate in the haupia. 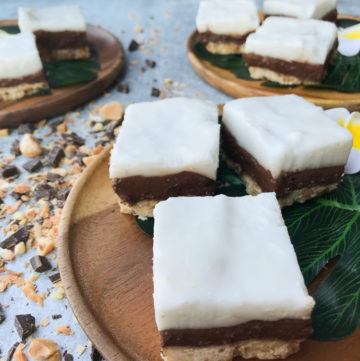 For the Macadamia Shortbread Layer:

For the Chocolate and Haupia Layers