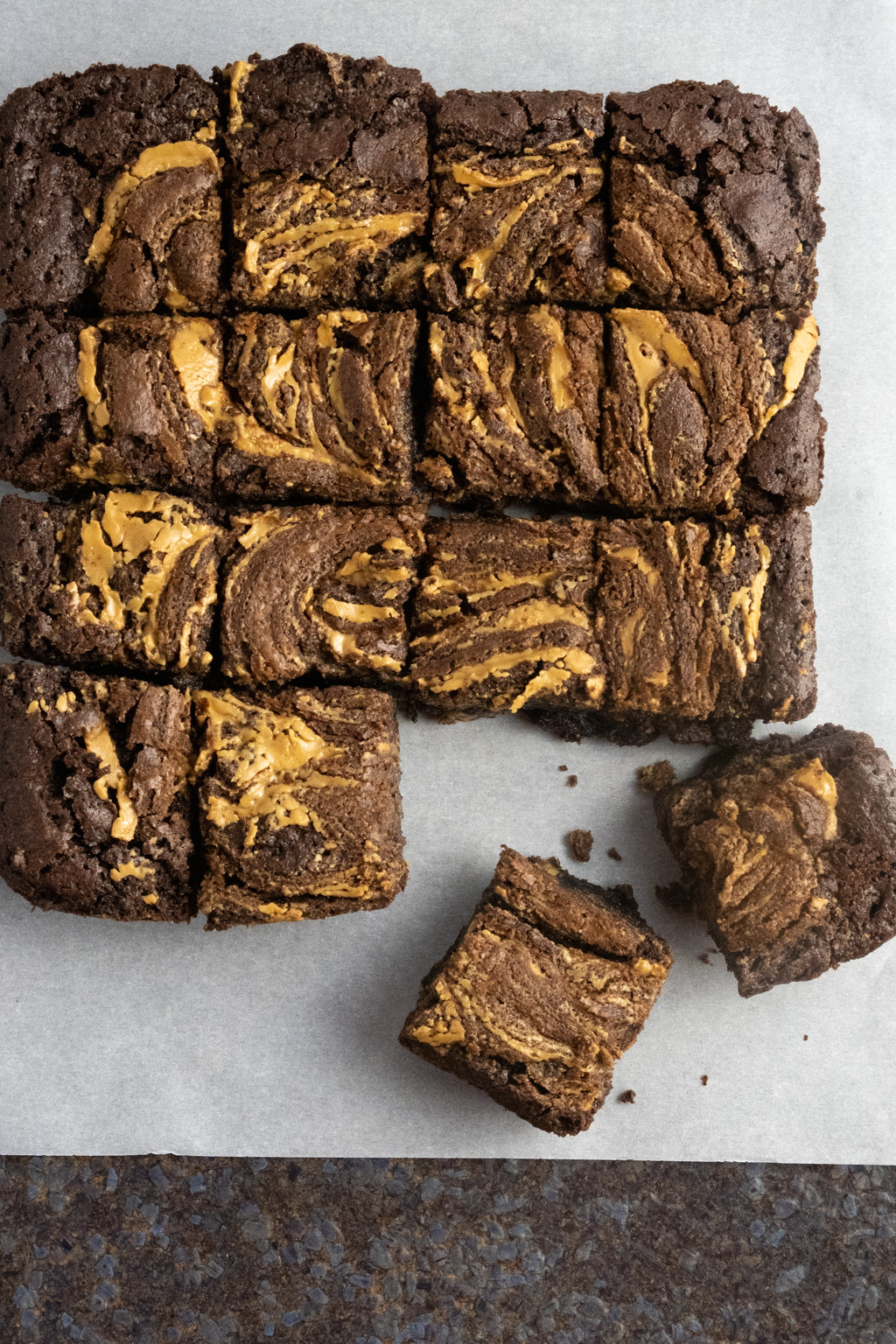 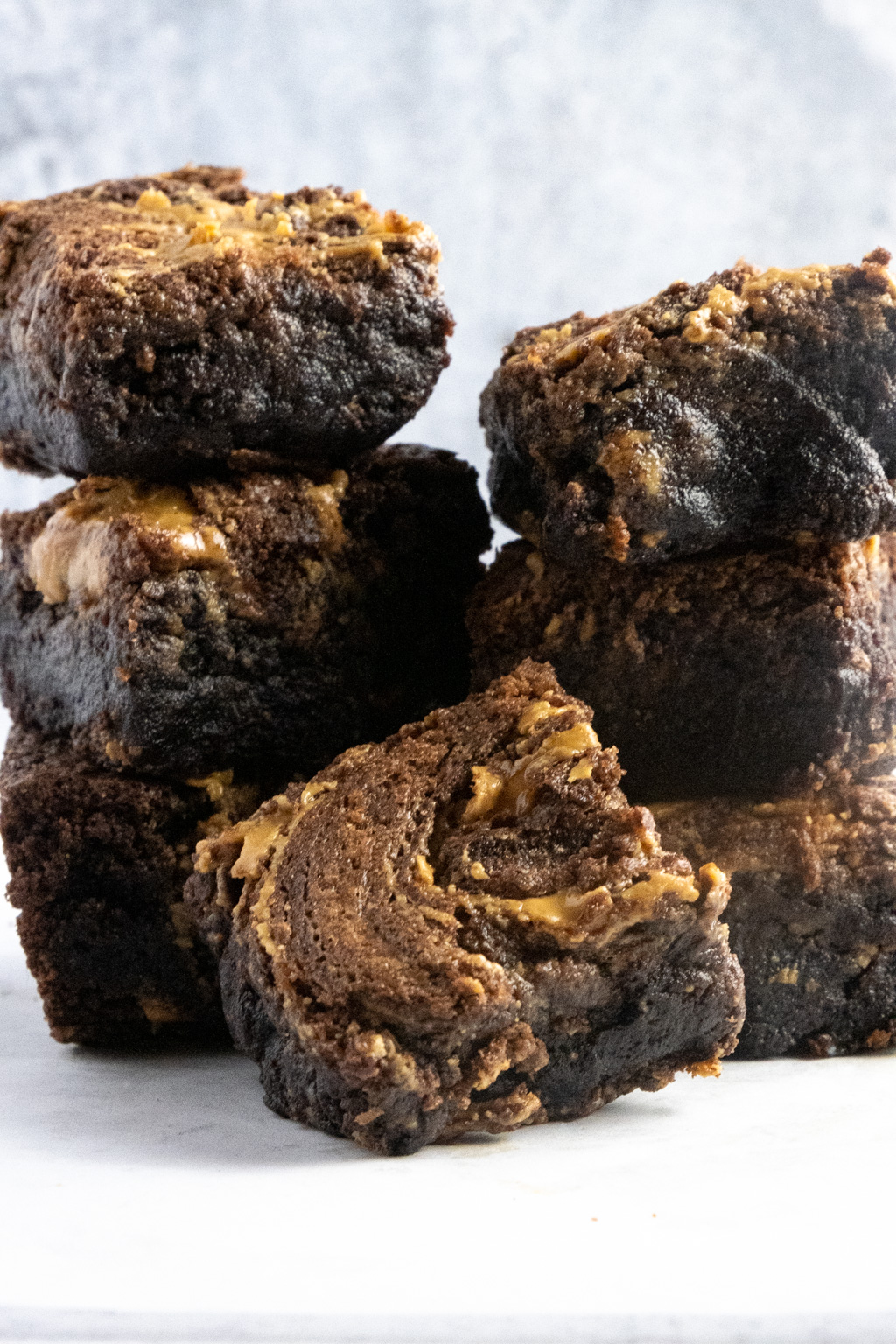 I am always trying to think of unique recipes, but sometimes you really just can’t go wrong with a classic. I’ve been using the same brownie recipe since I was a teenager, because if something is already good, is there really any need to change it? But occasionally  I do feel like making it a little fancier. There are really endless variations on brownies. This version is incredibly simple, but the flavor combo of peanut butter and chocolate changes it dramatically.

Sugar – The high quantity of sugar and butter in this recipe is what creates the fudgy texture. If you want to use less sugar, I don’t recommend just leaving it out. It would be better to use syrupy substitutes such as agave nectar or maple syrup. Replace 1 cup of sugar with ⅔ to ¾ a cup of liquid sweetener.

Chocolate liqueur – For brownies, I like to use creme de cacao, Godiva liqueur, or chocolate vodka. Alternatively, you can substitute 2 teaspoons of vanilla extract.

Peanut Butter – To create the swirl pattern, you need to use thin peanut butter. Natural peanut butter works better for this, but you can also use thick peanut butter that has been heated in the microwave. 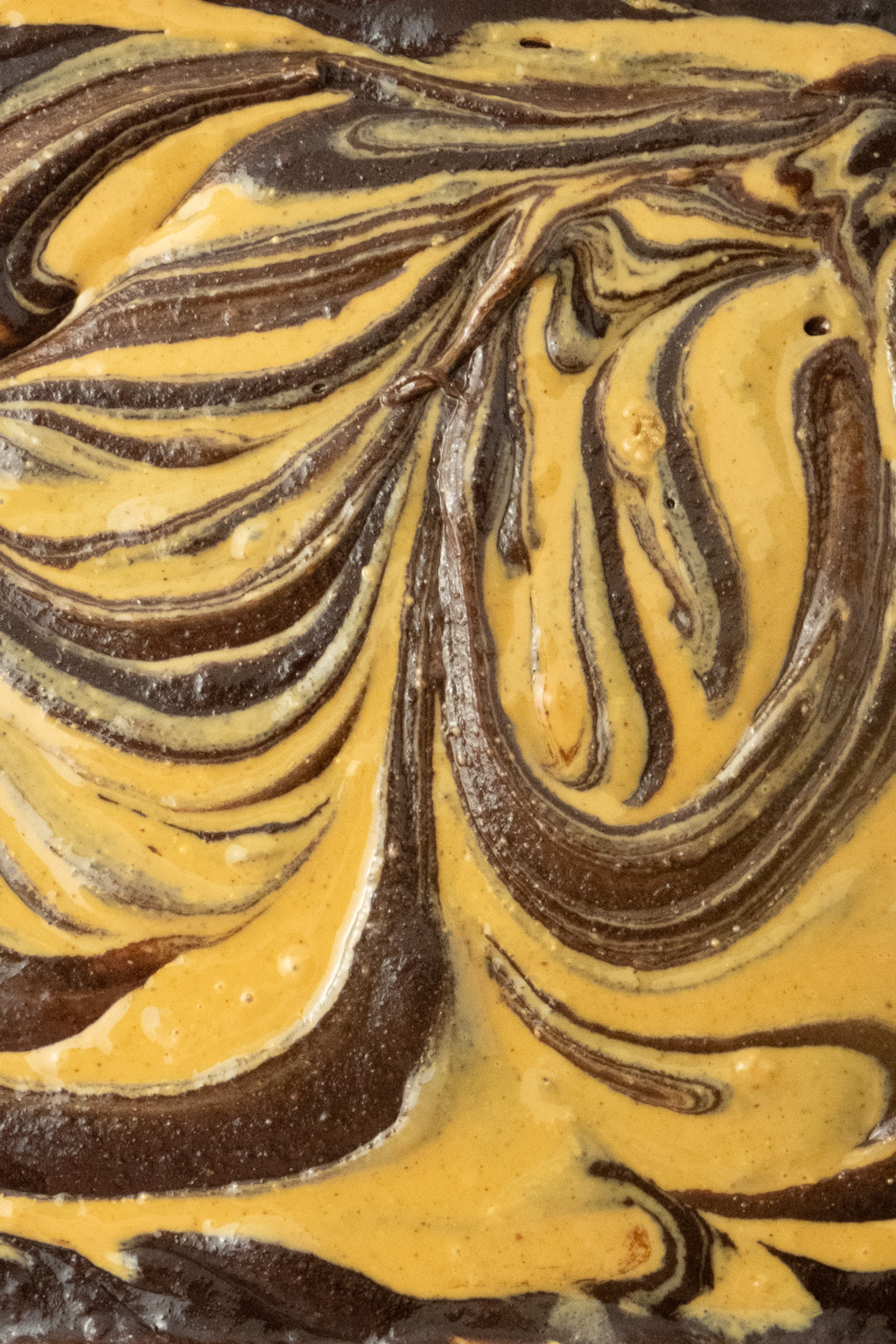 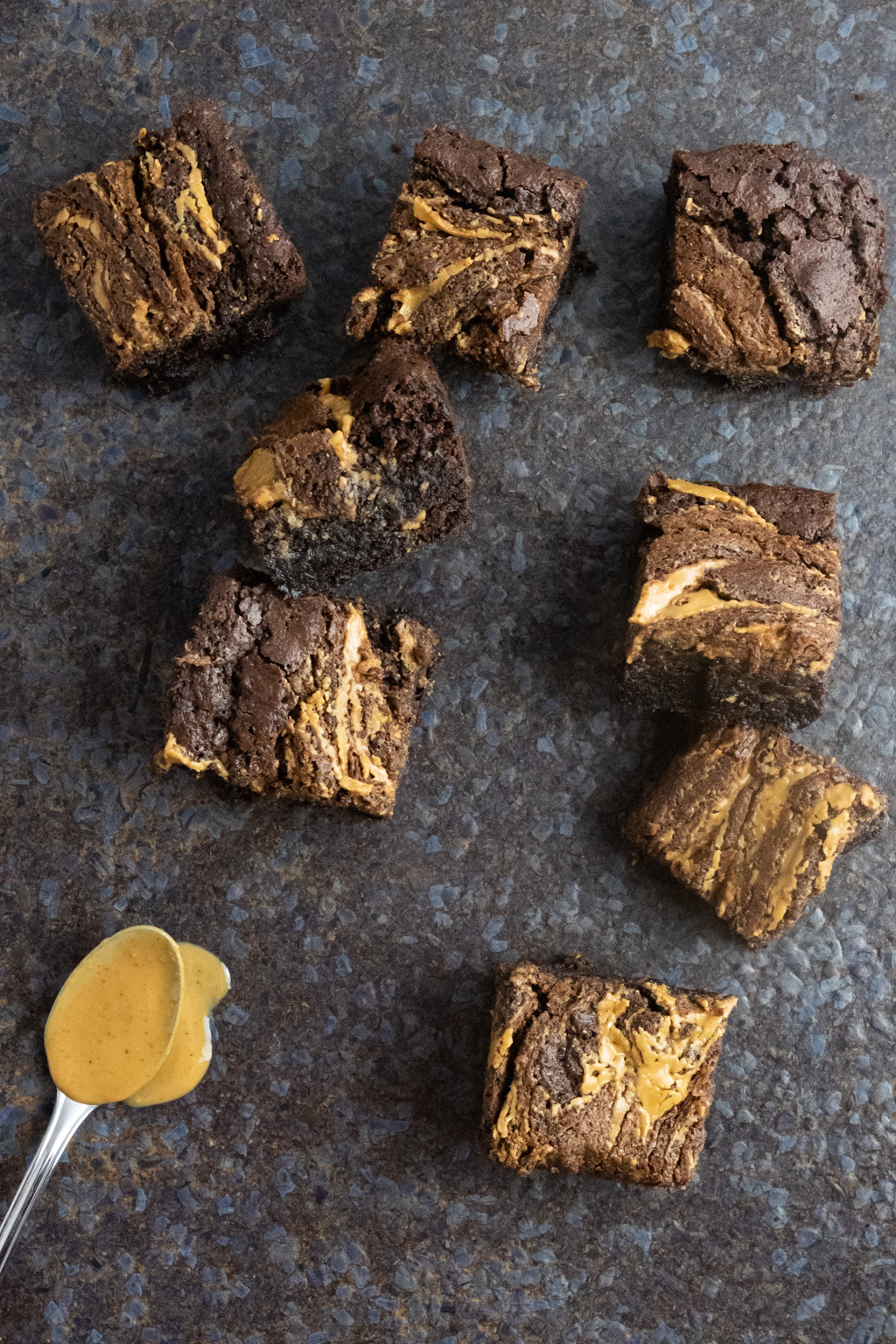 How to Make Brownies

Brownies are just about the easiest thing that you can bake. There are only four steps to them, and you can mix them in one bowl.

If you have ever baked a new brownie recipe uncertain of whether you are going to end up with fudgy or cakey brownies, this is what you should look for. Fudgy brownies, like actual fudge, will have a lot of sugar and butter. Cakey brownies, on the other hand, will have less sugar and butter, but more eggs and flour. Brownies that contain melted chocolate are more likely to be fudgy as well, though this is not necessarily always the case. 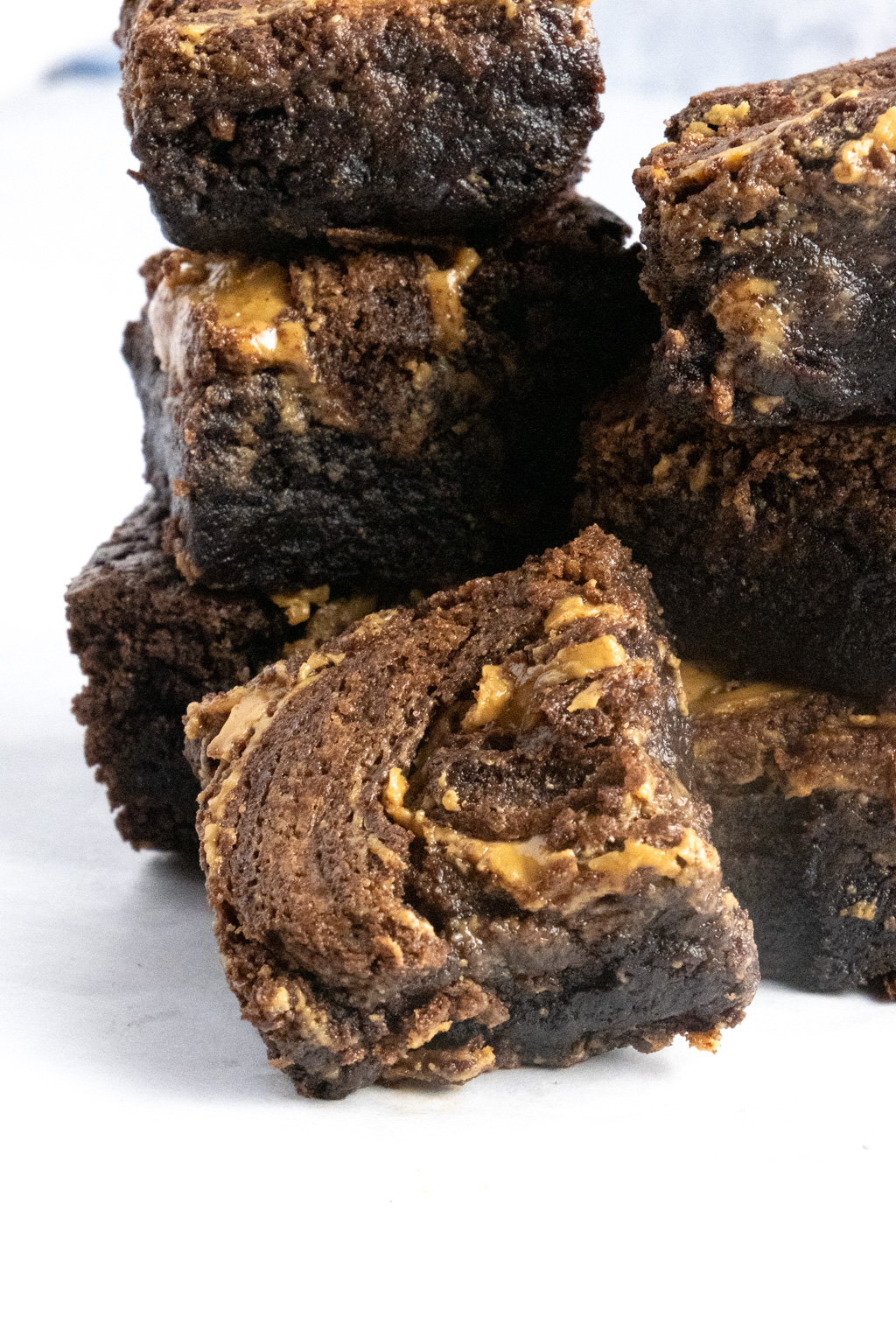