I made this recipe for St. Patrick’s Day, looking to find a way to combine all of the flavors of an Irish coffee – whiskey, brown sugar, cream, and, of course, coffee – into a bread pudding. I had never really made a lot of bread pudding before working on this recipe, and so I was surprised at the large variation in ingredient amounts I found in different recipes. The amount of bread is usually about the same, but the amounts of milk, eggs, and sugar can vary widely. I tried to get the perfect texture with this bread pudding – crunchy on top, and soft and puddingy underneath.

Bread – Make sure to use a good quality bread with a good flavor. Bread is the main ingredient here, so no matter what else you add to the pudding, the flavor of the bread is still going to come through.  I tried it with a French country loaf and with challah and liked the results – I did not like it so much with a baguette or sliced potato bread. I don’t recommend using sliced bread at all.

Age of Bread – The wide range of ingredient amounts I saw in recipes probably had to do with the age and type of bread used. I used bakery bread that was a few days old – if you were to use stale bread, it makes sense that you would need to add more milk.

Cream – Most bread pudding recipes call for butter, but I used cream in this one to keep with the flavor of Irish coffee. You could substitute butter for the cream.

Bread pudding is often served with Creme Anglaise, or a whiskey sauce. I made this sauce a little thicker by adding two teaspoons of flour, and gave it a strong flavor with the one-fourth cup of whiskey.

Whiskey – If you’d like it a little less strong, you can just omit the two tablespoons of whiskey added in at the end.

Flour – The flour is added here to thicken the sauce a little. You can omit it if you would like for it to be thinner. You could also substitue 1 tsp cornstarch. 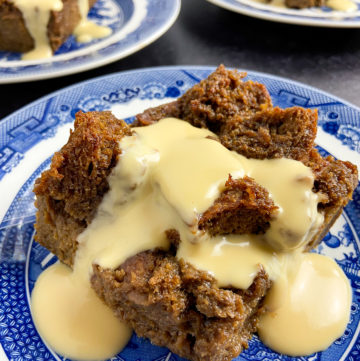 For the Irish Coffee Bread Pudding:

For the Brown Sugar Whiskey Sauce