While I’ve never been a fan of fruitcake (especially with those red and green cherries,) I am a big fan of buckwheat. Mostly I had it in pancakes and occasionally soba noodles, and I had never really tried it in anything else until I set out to make a recipe for some kind of buckwheat bread or cake. Buckwheat has such a strong flavor, it overpowers anything subtle, so to give this cake a fuller flavor, I added molasses, dried cherries soaked in amaretto, and a wintry mix of spices.

Dried Cherries – I used sour cherries, though they were sweeter once they had soaked in the Amaretto. Sweet cherries might actually work better in this recipe. I don’t recommend using fresh cherries because they will add water.

Dried Dates – I didn’t try substituting fresh dates, but they might work too.

Amaretto – I substituted white rum in this recipe once. The results were still good, but obviously no flavor was added. You might also try spiced rum or Grand Marnier. The cherry liqueurs that I had on hand were so medicinal-tasting that I hesitated to use them, but I am curious whether or not the end result might have been good, once the liqueur was mixed with the other flavors.

Walnuts – Toast the walnuts before adding them to the batter in order to bring out their flavor.

Molasses – If you don’t mind a strong honey taste, you could try substituting it for the molasses.

Oil – I usually prefer a light tasting oil in baking, but because of the strong flavors in this recipe, I was able to sneak in some vegetable oil that I needed to use up. 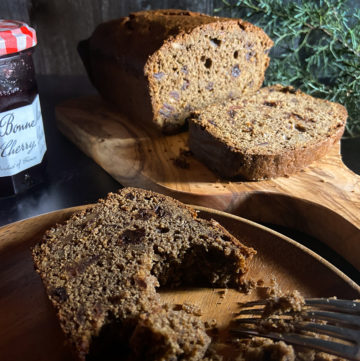