Brownies are the first thing I ever learned to bake. My mom’s brownie recipe was also the first recipe I ever memorized, and while I’ve made other brownie recipes, I always go back to the same one. I’ve probably made them at least once a month since I was 15 or 16 years old. They’ve always been something that seemed to take minimal effort after a long day of work or school, but maybe a little too easy to bring as a dessert to a party. This version is based on the same recipe, but is fancied up by adding a marbled layer of white chocolate cheesecake.

Chocolate Liqueur – This gives the brownies a little extra flavor. I used to use creme de cacao, but lately I’ve come to prefer chocolate vodka. Bailey’s or cookies and cream flavored liquor also works well. The original recipe called for vanilla extract, so it will always work fine if you don’t have anything else on hand.

Cocoa Powder – The original recipe is adapted from a Hershey’s recipe, so I’ve always used Hershey’s cocoa powder in these. Lately I prefer to use Hershey’s special dark. While Dutch processed cocoa has a better flavor, it does really weird things to the tops of these brownies, so I don’t recommend using it here. I also tried using chocolate, but decided I prefered the swirl that can be made with a thinner batter using only cocoa.

White Chocolate – For the sake of the flavor, make sure that you are using real white chocolate made with cocoa butter. Many chips and even bars that appear to be white chocolate are actually white coating made from another oil, usually palm kernel oil. White chocolate that has a yellow tint is even better, because that means it hasn’t been bleached. 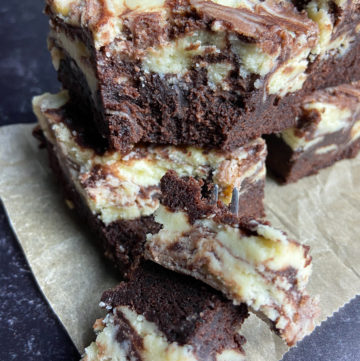 For the Brownie Layer

For the White Chocolate Cheesecake Layer