One of my favorite cookie recipes to make around the holidays is Fresh April Flours’ Maple Pecan Goat Cheese Sugar Cookies. I always love baking with goat cheese. I love the way it gives a subtle tart flavor to baked goods that no one can readily identify, and how everything you bake with it turns out fluffy despite your best efforts. That’s why this recipe, which started out as maple sugar cookie bars, turned into a cake. Still, I wanted to keep with the simplicity I’d originally hoped for with the cookie bars, so I baked this in an 8 x 8 inch pan and topped it with a layer of American buttercream and maybe some chopped pecans or walnuts. It makes for a perfect fall snack cake, or, if doubled, it could make an easy sheet cake to bring to a last minute get-together.

Maple Sugar – This is the key ingredient to get the maple flavor. My best results were with Shady Farms maple sugar. I tried using maple syrup as well, but I wasn’t happy with the results.

All-Purpose or Cake Flour – Cake flour will create a lighter texture. I used unbleached all-purpose so the cake would be a bit denser.

Milk – Any fat percentage will do.

Now we come to my favorite part of this cake. I’d meant for it to be a bourbon buttercream, but I never got around to visiting the store, and Scotch was what I had on hand.  This frosting is also very simple, but it can actually be easy to ruin. The most important thing is not to add the whiskey until the very end.

Butter – Softened to room temperature, but not too soft. About an hour at 65-70 F should do it.

Whiskey – I used the Macallan double cask 12 Scotch. Obviously, you could substitute bourbon or another type of whiskey, or really any other type of liquor with a compatible flavor.

Chopped Pecans and/or Walnuts– You could mix these into the frosting or just put them on top.

This frosting is easy to make, provided you follow the steps in the right order: 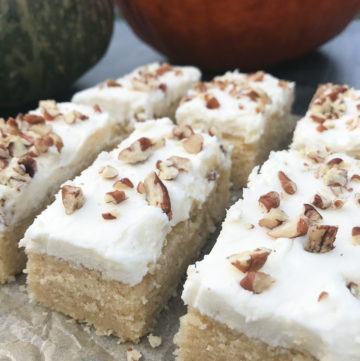 For the Maple Goat Cheese Cake

For the Whiskey Buttercream