Despite living in Alabama all of my life, I’ve never come around to really liking many non-dessert southern foods, and that’s especially true when it comes to breakfast. No shrimp and grits, no biscuits and gravy, none of that. Naturally the southern breakfast foods I do like are the sweeter ones, and this recipe combines two of them: classic sweet potato biscuits and cinnamon biscuits, the kind you make last minute on a lazy weekend morning instead of cinnamon rolls because you don’t want to wait for the dough to rise. Here I’ve combined the two in a giant cinnamon roll baked in a 10 inch cast iron skillet.

Flour – Make sure to measure your flour accurately, because if this roll gets too dense it won’t bake in the middle. Using a kitchen scale is always the safest way to measure.

Sweet Potato to Milk Ratio – Some sweet potatoes will be drier than others, so when adding the milk you really have to go by feel. The dough shouldn’t be too dry, but it shouldn’t be wet enough to stick to the counter when you try to roll it out.

Cornstarch – I like for cinnamon filling to be a little on the thick side, so I add cornstarch or flour, but this is optional.

Halfway between a buttercream and a glaze, this frosting is the perfect topping for cinnamon rolls and cookies. 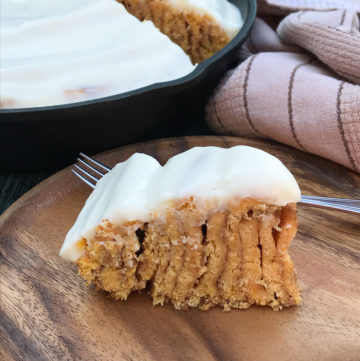 For the Sweet Potato Biscuit Dough

For the Cinnamon Filling

For the Cream Cheese Frosting